Home > Market Intelligence > Bitcoin’s Energy Consumption: Diving into the what and why of Bitcoin’s energy problem

Bitcoin’s Energy Consumption: Diving into the what and why of Bitcoin’s energy problem 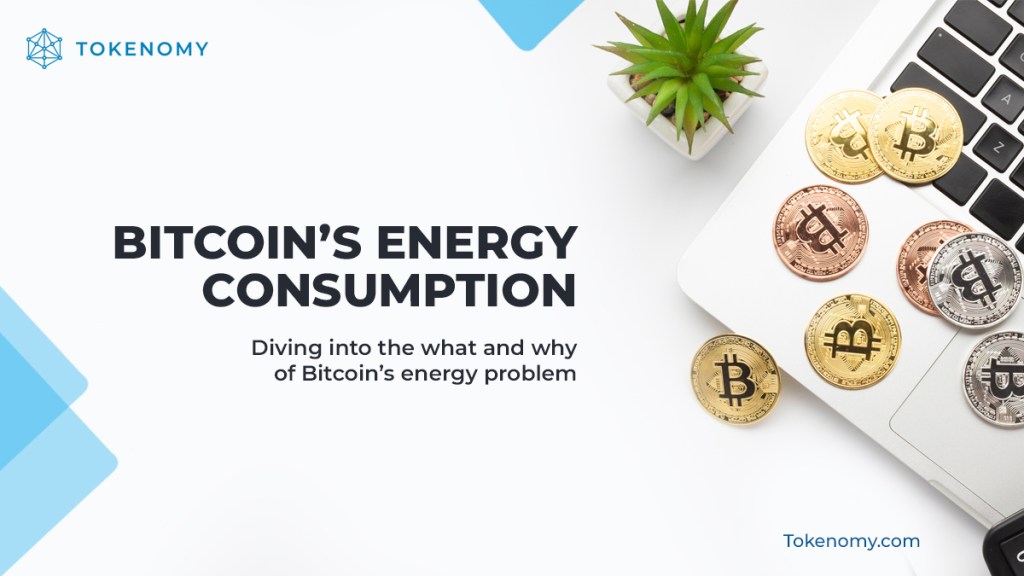 The debate over Bitcoin’s significant consumption of energy is not new.

Critics often lead with a visual like the one below, comparing Bitcoin’s energy usage to the total consumption of large countries like Malaysia and Sweden. 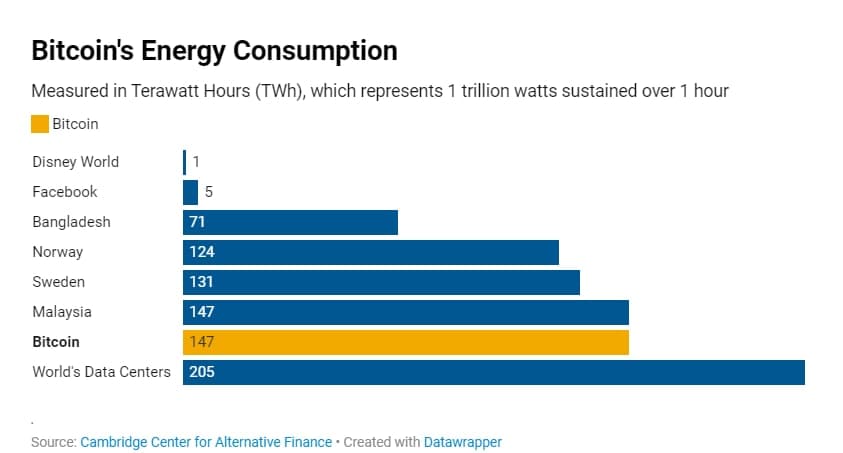 This article will attempt to demystify the debate by examining Bitcoin’s energy consumption, use of renewables, and utility.

Why does Bitcoin consume so much energy?

The use of renewables in Bitcoin mining

Bitcoin’s utility and the more energy efficient future of cryptocurrency

Why Does Bitcoin Consume So Much Energy?

To paraphrase Nic Carter in his article on the Bitcoin energy debate, one question that Sakoshi Nakamato faced when creating a new monetary system was: “How do I distribute units of currency in a way that is fair and engenders trust in the system?”

Holding onto the tokens or just distributing them to a small, elite group of friends would have created a privileged minority and discredited the promise of a trustworthy system. The solution to this problem? Distribute coins on a regular basis to individuals that have ventured a universally valuable commodity: energy. This is the idea behind Proof of work (PoW).

Proof of work refers to the energy spent Bitcoin mining, the energy-intensive process of validating and verifying transactions that take place on the Bitcoin network. In return for their effort, miners are rewarded with units of bitcoin. This process is akin to mining gold, as it is both capital intensive and operated in a free market system, allowing mining power to be distributed in a decentralized way around the world.

Thankfully, much of the work of issuing new coins via Proof of work has already been completed: about 89% of all of the bitcoin that will be in circulation has already been mined. Further, as the supply of bitcoin dwindles, the rewards (which can be thought of as a “subsidy” to encourage mining) given to miners are cut in half every four years.

Initially the reward for finishing a block of transactions was 50 bitcoins, but it is now down to 6.25 bitcoins. Unless the real value of Bitcoin doubles every four years until 2140, mining will become less lucrative as the rewards become more scarce. All of this is to say that:

In reality, it does not make sense for Bitcoin to handle frequent and reversible transactions, but rather to act as a final settlement layer. Sending a few dollars to a family member or buying a cup of coffee are problems that are already handled well by existing financial systems, with a low cost to the consumer. Performing such transactions on the Bitcoin network is like taking a plane from San Francisco to Berkeley — you could have just driven half an hour for a fraction of the cost of the flight. It is excessive.

However, the quick, secure, and final settlement provided by Bitcoin is a game changer for large international transactions, which typically take days, have high fees, and are subject to intense verification.

“Bitcoin offers fast, high-assurance, final settlement. This means transactors can trust that value transfers are absolutely final within a short period of time. This permits Bitcoin to scale to enormous size — billion-dollar transactions are common and settle without incident” — Nic Carter

We may think of Bitcoin not as the one size fits all solution for every transaction, but as a powerful tool to settle transactions between large banks, governments, and financial institutions across the globe.

It is infinitely cheaper (cost does not scale with transaction size) and more verifiable. In fact, additional payment layers can be built on top of Bitcoin providing greater scalability: thousands of smaller transactions can be wrapped up into a single daily settlement on the Bitcoin network.

The energy expenditure of the Bitcoin network is necessary to maintain the value of the currency and the security of the network. As the founder of Bit Gold, Nick Szabo, puts it: “Prolific resource consumption and poor computational scalability unlock the security necessary for independent, seamlessly global, and automated integrity.”

To take a step back, energy consumption is not the same as carbon emissions. The source of the energy determines its carbon footprint. As the worldwide output for renewable energy such as hydroelectric power, natural gas, wind, and solar grows, it begs the question: what proportion of mining is done with renewable energy?

The Use of Renewable Energy in Bitcoin Mining

“Imagine a 3D topographic map of the world with cheap energy hotspots being lower and expensive energy being higher. I imagine Bitcoin mining being akin to a glass of water poured over the surface, settling in the nooks and crannies, and smoothing it out.” — Nic Carter

Due to the expensive nature powering bitcoin mining rigs, miners often relocate to the cheapest source of energy. Some of those sources include:

White it is clear that some of the energy used for mining has renewable sources, the exact percentage is hard to estimate. There are hopes that the recently created Bitcoin Mining Council will shed more light on the details of miners’ energy usage, but current estimates have put it at anywhere between 39% by the University of Cambridge and 74.1% by CoinShares. Putting those numbers in context, only 20% of the United States’ energy consumption in 2020 was made up of renewables.

Jack Dorsey’s Square has invested over $200 million in Bitcoin, stating: “We believe that cryptocurrency will eventually be powered completely by clean power, eliminating its carbon footprint and driving adoption of renewables globally.”

On top of this bullish take, Square recently published a white paper entitled Bitcoin is Key to an Abundant, Clean Energy Future. If that title seems contradictory to what you have heard before, you aren’t the only one. However, the key is understanding the two fastest growing renewable energy sources, wind and solar.

Wind and solar power share a major drawback: intermittency. While energy sources such as nuclear, natural gas, and hydroelectric may be steady sources of power, solar supply peaks at midday, dropping to nothing at night. Wind is unpredictable, but tends to be stronger at night. Unfortunately, demand for power peaks in the early morning and evening, when the sun has just gone down. The excess energy being produced by solar during midday and wind at night must be stored somehow, or else it will be wasted.

Grid congestion (similar to traffic but in an electrical sense) further compounds this problem, meaning that not all energy may be successfully sent to places where it can be utilized. In fact, there are numerous solar and wind projects which have developers and financing readily available, but which grids cannot physically accommodate. Even though wind and solar are two of the least expensive renewables, intermittency and grid congestion have hindered their growth and expansion.

Bitcoin mining can solve this problem in three ways:

Some examples of groups mining powered by solar and wind energy were covered by Coindesk and The Merkle, although it seems this isn’t yet a widespread trend.

As we move into the future, energy will become more and more renewable. However, we still need to decide whether Bitcoin merits 0.54% of the world’s energy usage. If not Bitcoin, that energy could be used to power electric cars, supermarkets, data centers, and more.

Bitcoin’s energy consumption is one drawback to a system with countless advantages over traditional financial systems, such as:

Add to the above the idea of making wind and solar more economically viable, and Bitcoin’s high level of energy consumption is not reason enough to shut down the system. It has, however, encouraged the development of more efficient ways of maintaining the blockchain such as Proof of Stake.

Proof of Stake was introduced in 2012 in order to reduce Proof of Work’s energy dependence. Instead of relying on computing power, PoS requires nodes to engage in “staking,” which locks a certain amount of their cryptocurrency in a contract. Then, based on how much currency is staked, the time it has been staked for, and a level of randomization, a node is chosen to add the next block to the chain, receiving block rewards.

Ethereum, the second largest cryptocurrency by market cap, was recently upgraded to Ethereum 2.0, which runs on the more energy-efficient PoS model. PoS has its own weaknesses, such as a higher level of complexity which makes it harder to deploy, and not being as battle-tested as PoW.