As we head into the last quarter of 2022, it’s shaping up to be a rather dismal year. According to QCP Capital’s latest edition of “The Crypto Circular”, “…2022 has become the worst performing year in history for a cross-asset portfolio, even eclipsing the stagflationary 1970s!”. Most damaging of all has been the positive correlation between fixed income and risk assets.  “Nowhere to Hide…” as the publication is titled, hits home (see chart below). The crypto market was marred by its own set of events outside of macroeconomic forces: the collapse of Terra LUNA/UST, Celsius Network and Voyager Digital’s bankruptcy, and the implosion of Three Arrows Capital, to name a few. Are there any silver linings for a crypto-investor in The Crypto Winter of 2022?

Regulation. As highlighted by our CEO in our October newsletter, crypto-regulation is coming whether you like it or not. Sparked by the collapse of Terra in May 2022, regulators worldwide have stopped dragging their feet about crypto regulation and are making active progress towards devising a suitable framework. The U.S. published its first-ever regulatory framework on crypto, Singapore is working with industry players to revise regulations, Japan is implementing AML/KYC enforcement to crypto, and the list goes on. While regulations can sometimes be cumbersome, a clear and well-defined framework builds trust in the industry. It will eventually facilitate growth and capital when safeguards are in place.

Building. Much like an old-growth forest needs a good fire to renew itself, the meltdown has purged undesirable practices from the system allowing it to build back stronger. And build back, we’ve seen: Ethereum finally transitioned to Proof-of-Stake in September, governments globally are researching their own Central Bank Digital Currency (CBDC), TradFi companies like BlackRock, NASDAQ and SWIFT are making investments and partnerships into blockchain/crypto, and even non-finance companies like Google, Tiffany & Co. and Disney are making headway into the space. At Tokenomy, we are also focused on building and are continually improving our platform and product offerings. For example, we launched our iOS application and introduced the customized DCD (dual currency deposit) product this year.

Removal of “hot money”. Almost $2 trillion of market capitalization has been removed from the system since it peaked in November 2021. A significant amount of speculative capital has been removed, and what remains are long-term investors that see value in the technology. At Tokenomy, we too have a long-term mindset regarding investing, and the current environment is much healthier. With continued interest and investment from large asset managers and increasing recognition and acceptance of cryptocurrency as an asset class in multi-asset portfolios, this introduces stability to the market.

As you can see, a lot is going on under the “sea of red” numbers on your screen. There’s much to be hopeful for as a long-term investor as these silver linings progress.

Bitcoin may be a safe haven again according to Bank of America digital strategists, Alkesh Shah and Andrew Moss, who looked at the cryptocurrency’s correlation with gold, the S&P 500 and Nasdaq 100. “A decelerating positive correlation with SPX/QQQ and a rapidly rising correlation with XAU indicate that investors may view Bitcoin as a relatively safe haven as macro uncertainty continues and a market bottom remains to be seen,” the strategists wrote. A return to haven status would back up one of the leading investment arguments for Bitcoin, whose proponents suggested could represent a form of “digital gold.” 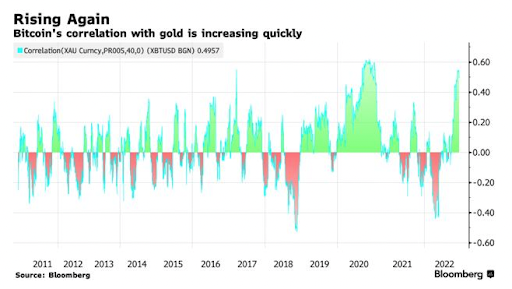 Google Cloud to Let Users Pay With Bitcoin, Ethereum, Dogecoin via Coinbase. Internet giant Google today said it would use Coinbase to accept crypto payments for cloud services early next year, according to a report by CNBC. Google announced the deal at this year’s Cloud Next, a conference where Google pitches its state-of-the-art cloud computing business (which accounts for nearly a tenth of its revenue) to companies.

Bank of New York Mellon is now open for crypto business. The nation’s oldest bank would become the first large U.S. bank to safeguard digital assets alongside traditional investments on the same platform. BNY Mellon won the approval of New York’s financial regulator to begin receiving select customers’ bitcoin and ether starting in October 2022. The bank will use Fireblocks software to store the keys to access and transfer those assets. The move marks an important milestone for traditional banks and their growing acceptance of digital assets as a legitimate market and a source of new business.

Japan is preparing an amendment to enforce Financial Action Task Force (FATF) travel rules on crypto by May 2023, Nikkei reported. The amendment will be introduced in the National Diet on Oct. 3, requiring exchange operators to collect customer information in transactions involving cryptocurrency and stablecoins. The Foreign Exchange and Foreign Trade Act and the International Terrorist Asset-Freezing Act will be updated to reflect the same changes, which will go into effect in May 2023.

The Monetary Authority of Singapore (MAS) published two consultation papers proposing regulatory measures to reduce the risk of consumer harm from cryptocurrency trading and to support the development of stablecoins as a credible medium of exchange.

South Korea plans to offer a digital identity secured by blockchain to citizens with a smartphone as it taps into the world’s most tech-savvy population to boost economic growth. Korea sees the economic value of digital IDs at around 3% of GDP. Smartphone-implanted IDs are among the latest emerging technologies underpinning a digital economy that has expanded as more people work from home, make cashless payments, and explore the metaverse.

California state Senator Robert Hertzberg, introduced a bill to allow residents’ vital records to be kept on the blockchain. Governor Gavin Newsom approved this bill to establish the technology as an integral part of state recordkeeping. He instructs county records offices to allow for the use of blockchain technology and verifiable credentials. The technology would be established to distribute birth, death, and marriage records, allowing PDFs to be sent immediately rather than a typical 10-day postal delivery.

The Cambridge Bitcoin Electricity Consumption Index (CBECI) estimates that by mid-September 2022 (21/09/2022), approximately 199.65 MtCO2e (million tonnes of carbon dioxide equivalent) can be attributed to the Bitcoin network since its inception. The 48.35 MtCO2e this year represents roughly 0.10% of global greenhouse gas (GHG) emissions. It is similar to countrieslike Nepal (48.37 MtCO2e) and the Central African Republic (46.58 MtCO2e), or about half that of gold mining (100.4 MtCO2e). 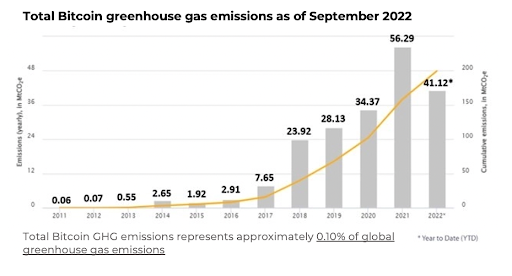 Bitcoin’s mining difficulty rose to an all-time high. The latest difficulty adjustment is in, and it now stands at 35.6 trillion, up a whopping 13.55% from the previous measure.

The current network hash rate is 257 million terahashes per second (TH/s), according to blockchain.com, a significant rise from last year when it was at around 140 million TH/s. Rising difficulty paints an even drearier picture for bitcoin miners already feeling the squeeze of weak bitcoin prices and higher energy costs.

TBD partners with Circle to bring USD stablecoin savings and remittances global. TBD is the bitcoin-focused subsidiary of Twitter co-founder Jack Dorsey’s Block. The collaboration aims to lay the foundation to access stablecoins globally, so that developers can build upon the infrastructure and crypto wallet providers can plug into the open-source protocol. It includes building sufficient links – on-ramps and off-ramps – between the traditional government-issued (fiat) currencies and blockchain-based digital currencies.

Coinbase and Blockchain.com have secured in-principle approval (IPA) from the Monetary Authority of Singapore (MAS) to operate as a major payments institution in the country. The approval enables them to provide regulated digital payment token (DPT) products and solutions in Singapore. So far, Singapore has given 17 IPAs and licenses to DPT platforms. Nearly 180 crypto firms applied for the licence in Singapore last year.

SWIFT, the interbank messaging system that allows for cross-border payments, is working with Chainlink, a provider of price feeds and other data to blockchains, on a cross-chain interoperability protocol (CCIP) in an initial proof-of-concept. CCIP will enable SWIFT messages to instruct on-chain token transfers, helping the interbank network to be able to communicate across all blockchain environments.

BNB Chain, the native blockchain behind the Binance crypto exchange, suffered a $566 million exploit after a hack on the BSC Token Hub bridge. The hacker took a novel approach to siphon the funds across other networks, making off with about $110 million. The BNB Chain halted the network and is weighing an asset freeze, highlighting major centralization issues. This exploit marked the 6th largest DeFi hack.

Metaverse trading volume dropped 80%, but the hype hasn’t decreased, according to DappRadar. It stated that Q3 trading volume for the top 10 Metaverse projects may have fallen 80% from Q2, but this could mainly reflect the decreasing asset price (e.g. the floor prices for NFT land plots had decreased by 75% on average) and not necessarily lack of interest. Moreover, the average number of NFT sales only decreased by 11.55% compared to Q2. 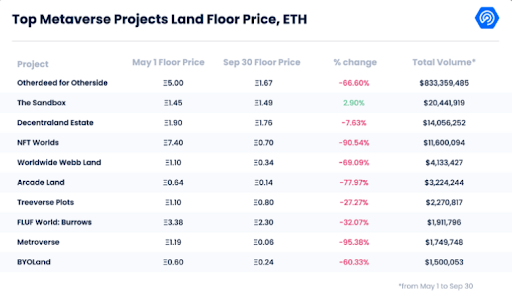 According to data from a Dune Analytics dashboard, the fund spent $35 million on NFTs last year.  But the collection’s value, now at 625 ETH, dwindled to under $1 million, according to the latest analysis by Nansen.

Huobi is selling a majority stake to About Capital Management, a Hong Kong-based investment company. Huobi said there would be no impact on the exchange’s core operations, and it would focus on international business expansion. The financial terms of the deal were not disclosed.

Kim Kardashian has been charged with unlawfully touting crypto security by the Securities and Exchange Commission (SEC). The regulator said that Kardashian didn’t disclose the payment received for promoting EthereumMax’s token. The star has agreed to pay $1.26 million in penalties and will work with the SEC on its ongoing investigation. “This case is a reminder that, when celebrities or influencers endorse investment opportunities, including crypto-asset securities, it doesn’t mean those investment products are right for all investors,” SEC Chair Gary Gensler said on Twitter. 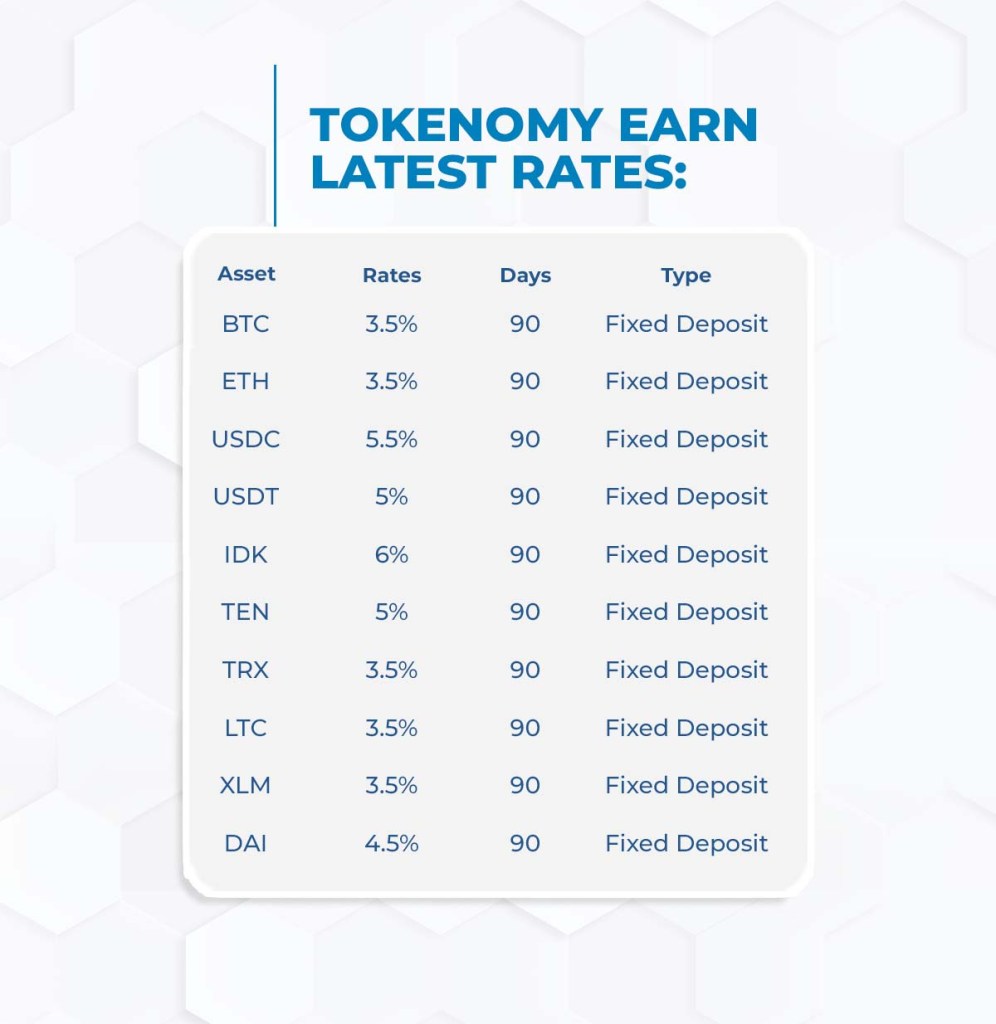